Have you ever heard those cool old stories about how the world came to be? I drive three kids to school every morning when I'm in town in Salt Lake City. One of those days, Joe, Matthew, Louis and I started brainstorming on why my arms were so little. My nephew Luke and I had a long trip to a storytelling event up in Washington a couple weeks later. We fleshed out some of the original ideas and came up with a couple new ones.

On Nov 29, 2016, I took 8 of those ideas to a couple of open mics in Salt Lake City. That's what the video above is. It's just audio, you'll just see my ugly mug the whole time, but I go through all the ideas twice.. once early in the evening at a cafe and then late at night in a bar. I know I do much better earlier when I'm awake. At least that's what I think is the difference.

One of the original ideas I had tried at open mic at Wiseguys in Salt Lake City, as well. It was the Arm Party version:

A couple weeks later, I tried the vampire butt one at Wiseguys, as well:

On December 28, 2018, I completed the New York Times Crossword Puzzle and then every day since then, I've completed each day's puz... 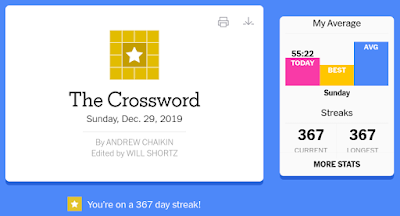